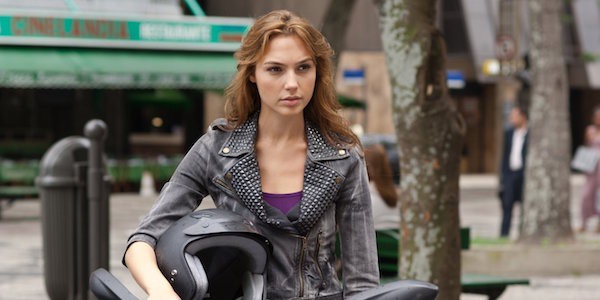 Before she joined the DC Extended Universe to play Wonder Woman, Gal Gadot was best known to movie fans for playing Gisele Yashar in three of the Fast And Furious movies. Gadot has long since departed that series, but last night during the MTV Movie & TV Awards, the actress showed up to present the franchise with the Generation Award. Before handing the award to her past costars, Gadot delivered a heartfelt speech about what the Fast And Furious series has accomplished over its 16 years in Hollywood, specially focusing on its core theme of family, both in this fictional world and among the actors. She said:

Before I was Wonder Woman, I got a call that would change my life. I was asked to be a part of the Fast And Furious franchise. The stunts may get bigger and crazier, but the heartbeat of the franchise, the reason people keep packing theaters over and over again is family. A diverse group of people who stick together, no matter what, through onscreen adventure and real-life tragedy.

Following that homage about the Fast And Furious franchise’s primary emotional hook (you could play a drinking game with how many times someone says “family”) and a video mashup of important scenes from the eight movies, Gal Gadot presented the Generation Award to Vin Diesel, who came on stage accompanied by Michelle Rodriguez, Tyrese Gibson and Jordan Brewster. After accepting the golden tub of popcorn, Diesel thanked Universal, the franchise’s various directors and the fans for all the support over the years, Diesel also paid tribute to his late costar/friend Paul Walker, which included how 15 years earlier, the two of them were on that MTV stage accepting the Best Duo award for the movie that started it all, The Fast and the Furious.

While she wasn’t one of the leading protagonists during her time in the Fast And Furious world, Gal Gadot’s Gisele Yashar left a meaningful impact in the middle section of the series. Gisele was introduced in 2009’s Fast & Furious as a liaison for Arturo Braga, but after Dominic Toretto saved her life, she aided him in tracking down the main antagonist. Gisele returned in Fast Five as one of the people Dom recruited for the Rio de Janeiro heist. It was there that she met Han Seoul-Oh, and by the end of the movie, the two of them were romantically involved. Gisele returned again in Fast & Furious 6, but during the climactic plane sequence, she sacrificed herself to save Han. Gadot also reprised Gisele in Furious 7 for a flashback where she found the amnesia-stricken Letty Ortiz, but that scene was cut from the movie.

The Fate of the Furious is still playing in theaters, and two more movies are scheduled for 2019 and 2021, respectively. A spinoff starring Dwayne Johnson’s Luke Hobbs and Jason Statham’s Deckard Shaw is also in development. As for Gal Gadot, you can see her reprise Diana of Themyscira when Wonder Woman comes out on June 2.