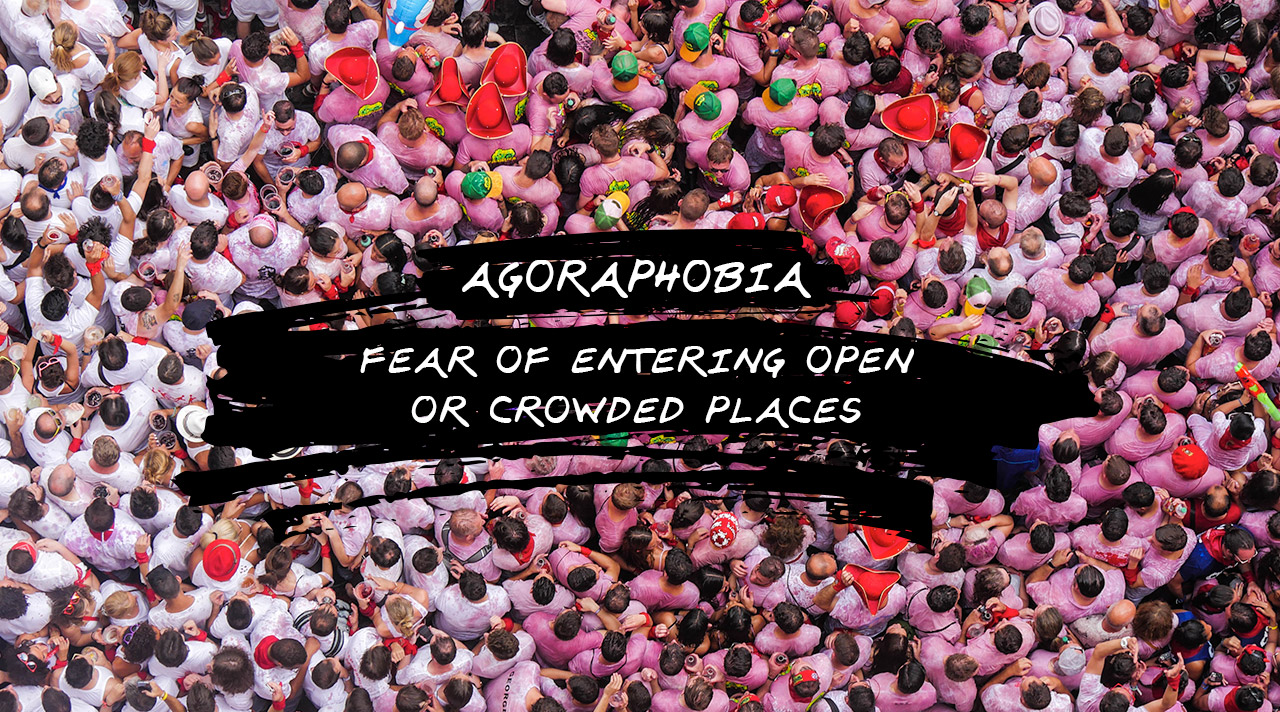 Agoraphobia is a type of anxiety disorder that causes people to avoid places and situations that might cause them to feel:

People with agoraphobia often have symptoms of a panic attack, such as a rapid heartbeat and nausea, when they find themselves in a stressful situation. They may also experience these symptoms before they even enter the situation they dread. In some cases, the condition can be so severe that people avoid doing daily activities, such as going to the bank or grocery store, and stay inside their homes most of the day.

The National Institute of Mental Health (NIMH) estimates that 0.8 percent of American adults have agoraphobia. About 40 percent of cases are considered severe. When the condition is more advanced, agoraphobia can be very disabling. People with agoraphobia often realize their fear is irrational, but they’re unable to do anything about it. This can interfere with their personal relationships and performance at work or school.

If you suspect you have agoraphobia, it’s important to receive treatment as soon as possible. Treatment can help you manage your symptoms and improve your quality of life. Depending on the severity of your condition, treatment may consist of therapy, medications, and lifestyle remedies.

What Are the Symptoms of Agoraphobia?

People with agoraphobia are typically:

Agoraphobia often coincides with panic attacks. Panic attacks are a series of symptoms that sometimes occur in people with anxiety and other mental health disorders. Panic attacks can include a wide range of severe physical symptoms, such as:

The exact cause of agoraphobia isn’t known. However, there are several factors that are known to increase your risk of developing agoraphobia. These include having:

Agoraphobia is also more common in women than in men. It usually begins in young adulthood, with 20 years being the average age of onset. However, symptoms of the condition can emerge at any age.

How Is Agoraphobia Diagnosed?

Agoraphobia is diagnosed based on symptoms and signs. Your doctor will ask you about your symptoms, including when they started and how often you experience them. They’ll ask questions related to your medical history and family history as well. They may also perform blood tests to help rule out physical causes for your symptoms.

In order to be diagnosed with agoraphobia, your symptoms need to meet certain criteria listed in the American Psychiatric Association’s Diagnostic and Statistical Manual of Mental Disorders (DSM). The DSM is a manual often used by healthcare providers to diagnose mental health conditions.

You must feel intense fear or anxiety in two of more of the following situations to be diagnosed with agoraphobia:

There are additional criteria for a diagnosis of panic disorder with agoraphobia. You must have recurrent panic attacks, and at least one panic attack must have been followed by:

You won’t be diagnosed with agoraphobia if your symptoms are caused by another illness. They also can’t be caused by substance abuse or another disorder.

How Is Agoraphobia Treated?

There are a number of different treatments for agoraphobia. You’ll most likely need a combination of treatment methods.

Psychotherapy, also known as talk therapy, involves meeting with a therapist or other mental health professional on a regular basis. This gives you the opportunity to talk about your fears and any issues that may be contributing to your fears. Psychotherapy is often combined with medications for optimum effectiveness. It’s generally a short-term treatment that can be stopped once you’re able to cope with your fears and anxiety.

Cognitive behavioral therapy (CBT) is the most common form of psychotherapy used to treat people with agoraphobia. CBT can help you understand the distorted feelings and views associated with agoraphobia. It can also teach you how to work through stressful situations by replacing the distorted thoughts with healthy thoughts, allowing you to regain a sense of control in your life.

Exposure therapy can also help you overcome your fears. In this type of therapy, you’re gently and slowly exposed to the situations or places you fear. This may make your fear diminish over time.

Certain medications can help relieve your agoraphobia or panic attack symptoms. These include:

Lifestyle changes won’t necessarily treat agoraphobia, but they may help reduce everyday anxiety. You may want to try:

During treatment, it’s best to avoid taking dietary supplements and herbs. These natural remedies aren’t proven to treat anxiety, and they may interfere with the effectiveness of prescribed medications.

What Is the Outlook for People with Agoraphobia?

It isn’t always possible to prevent agoraphobia. However, early treatment for anxiety or panic disorders may help. With treatment, you have a good chance of getting better. Treatment tends to be easier and faster when it’s started earlier, so if you suspect you have agoraphobia, don’t hesitate to seek help. This disorder can be quite debilitating since it prevents you from participating in everyday activities. There’s no cure, but treatment can greatly relieve your symptoms and improve your quality of life.

Related Items:a condition in which feelings of terror arise from unrealistic fear is, agoraphobia, agoraphobie, anxiety ball, at this point i'm too afraid to ask, cause fear, define afraid, define alone, define errands, define terrified, difference between fear and anxiety, don't @ me meaning, don't be afraid to catch feelings, don't leave, easy agario, fear of being watched, fear of eyes, fear of getting lost, fear of men phobia, fear of space, fear of time, fear online, fear.house, goraphobic, great fear definition, i don t know why sometimes i get frightened, i don t want to go back alone, i don't know why sometimes i get frightened, i don't like being around people, i may have gone too far in a few places, i'm scared, if you don t like it you can get out, is agoraphobia a disability, is agoraphobia inherited, it's afraid, no more panic health anxiety, panic disorder with agoraphobia, panic disorder without agoraphobia, panicking definition, penis phobia, phobia movie, piper is diagnosed with agoraphobia because she experiences intense fear and anxiety of ________., scared people, try not to get scared, what am i scared of, what famous person has agoraphobia, what is the fear of anxiety called, when i rule the world im gonna make you, why am i scared
Share
Tweet
Share
Share
Email
Click to comment