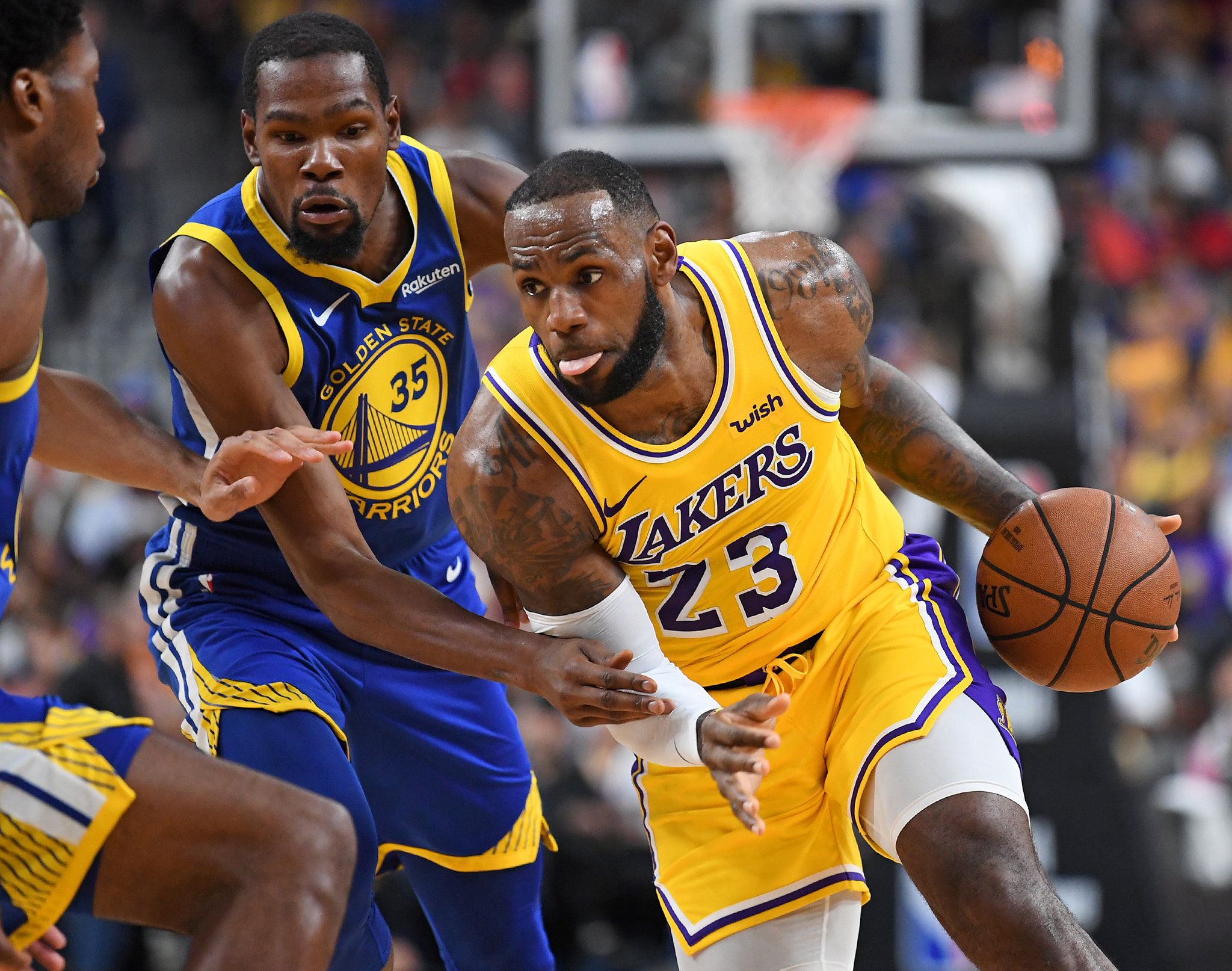 Say this for the New York Knicks: Since the start of this super-team boom, they have consistently put themselves in a position to land the game’s biggest stars. They just haven’t actually done it. At present, they’re armed with two max salary spots as we gear up for the summer of 2021 when Giannis Antetokounmpo hits the market.

Why do they have these max spots? Because they’re leftover from last summer’s failure to lure Kevin Durant and Kyrie Irving, or really any available running mate Durant wanted. So certain were the Knicks that they were going to get Durant that owner James Dolan started hinting it was basically a done deal as early as March of 2019, suggesting on ESPN Radio that players were telling the Knicks they were their preferred destination.

“New York is the mecca of basketball and we hear from people all the time, from players, from representatives about who wants to come,” Dolan infamously said while appearing on The Michael Kay Show. “… I can tell you from what we’ve heard, we’re going to have a very successful offseason when it comes to free agents.”

Though Durant wasn’t mentioned by name, the message was clear. He was the guy, and the Knicks were getting him. Irving would then follow. The financial groundwork had been laid and all the Knicks had to do was plug in the pieces. It was supposed to be as simple as that.

As it turned out, the logic was two-thirds founded. Durant and Irving did want to team up, and they did want to do it in New York. Just not with the Knicks. Within hours of the 2019 free agency period opening, Durant and Irving committed to the Brooklyn Nets and the familiar feeling of pipe-dream optimism giving way to Debbie-Downer reality once again enveloped the most unsuccessful “storied” franchise in sports.

When we thought we were getting LeBron James.

As was the case with Durant, the hype around LeBron to the Knicks started early and faded late. It was the same scenario. The prevailing thought was that LeBron would indeed leave Cleveland, and the Knicks were positioned with two max salary spots to entice him and a running mate of his choosing.

“We felt he would definitely leave [Cleveland], and we thought [New York] was the logical place for him,” a source who was within the Knicks organization in 2010 told CBS Sports. “Madison Avenue, [we would be able to] build around him because we had a lot of cap room we had emptied out for that summer, we had a couple good young players and we played in the Garden. CC Sabathia was front row at many of our games, which fueled [the rumors] even more. People’s assumptions were all pointing him our way.”

Sabathia, of course, had also come from Cleveland to New York, and he and LeBron were friends. Relationships were obviously a key dynamic in LeBron’s recruitment. He wanted to play with, and be surrounded by, his buddies, many of which happened to be some of the other best players in the world, namely Dwyane Wade, and to a lesser extent Chris Bosh.

“We definitely had talks about bringing in two [superstars],” the source said. “Amar’e [Stoudemire] was in those discussions, too. [Carmelo Anthony] was not talked about so much [as part of that package deal], but we did discuss being able to go get him the following summer if we didn’t get the players we wanted [in 2010].”

CBS Sports’ Sam Quinn recently published a story going down the “what if LeBron had signed with the Knicks?” rabbit hole, and he imagined a scenario in which Wade followed LeBron to New York with Anthony subsequently requesting a trade from Denver. It is the only way a Big 3 could’ve happened in New York, as the Knicks didn’t have the necessary cap space to sign three max free agents outright, even if they agreed to take the relative discount LeBron, Wade and Bosh wound up taking in Miami.

By the time the 2009-10 season ended and the free agent period was around the corner, talk of a Big 3 in Miami had become a real possibility. But by then, the Knicks were seen as a significant underdog to land LeBron, if not out of the conversation altogether. It was during the season when LeBron was still with Cleveland and trying as best he could to deflect daily speculation that he might leave, just as Durant did throughout the 2018-19 season with Golden State, that the Knicks were considered a frontrunner for the King.

That’s when they started planning how he would fit into Mike D’Antoni’s system, and the possibilities were tantalizing, to say the least. With LeBron’s ability and willingness to pass the ball, the Knicks envisioned him at the top of their offense leading breaks and potentially playing pick and roll with Stoudemire, a 6-foot-8 Steve Nash if you will, which is equal parts easy to imagine and downright terrifying.

“He would have thrived,” Phil Weber, an assistant coach on D’Antoni’s Knicks staff, told CBS Sports. “He would have been our point guard, but we would’ve utilized him in many ways. No need to adapt [his game].”

D’Antoni and Weber had both coached Stoudemire in Phoenix, and they knew how devastating a partnership he could form with a playmaker like LeBron. People largely remember Stoudemire as a diminished version of himself during his Knicks tenure, chronic knee injuries having robbed him of his once breathtaking athleticism, but Weber is quick to point out what so many people forget: Stoudemire, who committed to New York for $100 million before LeBron made his infamous ‘Decision’ to take his talents to South Beach, was a legit MVP candidate through the first four months of his Knicks tenure.

Prior to the Knicks trading for Anthony at the February deadline, Stoudemire was averaging 26 points and just under nine boards through the first 54 games of the 2010-11 season, and he only missed one game during that stretch. Consider that Stoudemire posted at least 20 points in 26 straight games that season, and at least 30 in nine straight games, the latter of which is a Knicks record, and it’s one of the great underrated seasons in league history

That said, when Anthony eventually arrived via the deadline trade with Denver, the Stoudemire honeymoon came to a pretty abrupt end. Anthony just isn’t the same kind of partner that LeBron would’ve been with Stoudemire. Melo is going to do his iso-ball thing, jab steps, post-ups and lots of elbow jumpers, and Stoudemire, raised in Phoenix on the two-man game, fit far less naturally into that equation.

“The biggest issue for Amar’e was us bringing in Tyson [Chandler] the following year,” Weber said. “Amar’e was a five. He did not fit as a four. Melo and Tyson were great as a 4-5 combo; we knew it, but Amar’e was still too prominent to [move to the bench]. That was his biggest issue. To be effective, he needed to play the five.”

With LeBron, Amar’e would’ve been the Knicks’ five with a superhero pick-and-roll partner posing nightmare matchup issues for opposing centers as the league had yet to collectively embrace small-ball. In 2010, there were still a lot of lumbering big men who would’ve had no chance of keeping up with a Stoudemire-LeBron two-man game.

The Knicks thought it was going to happen. If not with Stoudemire, then with Wade as the wingman. Either way, for a minute they thought they were getting LeBron. They had everything mapped out. The money. The offense. His pick of partners. The innovative coach who could tap into all the versatile components of LeBron’s game. The big city. Bright lights. The Garden. What more could the best player in the world want than to be handed the keys to the most famous arena in the world with a chance to play hero for a fanbase as passionate as it was desperate?

Turns out, South Beach was simply more alluring. As was playing with Wade and Bosh and growing within the Heat’s culture under the leadership of Pat Riley. In 2017, Wade said the Knicks as an organization “wasn’t ready to take on what we wanted to do.”

“The city? Yeah, the city was ready,” Wade said. “The market? The market was there. It’s New York. But [from] an organization standpoint, we didn’t feel like they could handle it.”

That just about says it. Two stars were never as serious about going to the Knicks as the Knicks thought they were, and it was largely because the Knicks didn’t see themselves as the portrait of instability that the players they were chasing did. What has changed?

Since that time, the Knicks thought they had the best trade package for Anthony Davis. Then they thought they were getting Durant and Irving. Now they’re in the business of short-term contracts to make sure they keep money open for Giannis, who becomes the latest and greatest pipe dream the Knicks expect to come true for the simple fact they’re the Knicks, which the organization still somehow believes carries significant weight. The fact is, that’s not true today, and it wasn’t true in 2010.

“It was becoming less apparent [LeBron] was coming as the process continued,” Weber said. “That was the beginning of the realization that just because it’s New York doesn’t mean you get the big name.”